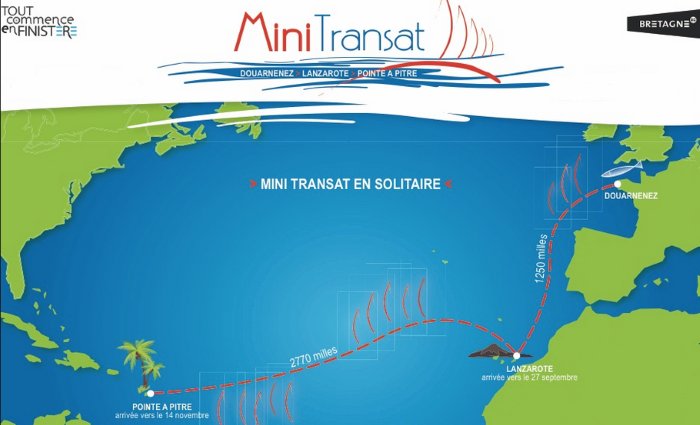 Partners know what is what moves us, what makes us feel alive?, is the magic of life… because you will recognize tingle depths of your being, you will open your potential, you You will be capable of anything (or at least feel able). Because with it you will recognize on your side you will see the difficulties are being resolved one after another. There can be no hurry, the magic of which I speak is not to hurry, he wants the keep alive not that crazy again.

I admit that I feel when I step to fulfill my dream, it is, but especially that you see distant dream, but hard not impossible … When I give that firm step, the commitment, the step that no longer It allows a step back or a misstep. When I cross that line opens before me a world of possibilities, some more help than others, but all will give you a hand.

I decided to make the MINITRANSAT, try it the 2017, but I do not care plans go wrong and have to postpone. It is already decided … no turning back, we must give everything to the end, surely this makes me !.

A long time that the Earth magnetic property known ago, this property has allowed humans and other animals, orientation on the surface of our planet since time immemorial is assumed. But what it is really the Earth’s magnetism?

To answer this important question may be useful to know first what is or what is known to the simple magnetic field.

Magnetic field, a magnetic field is not visible representation of a sensitive forces but whose origin is attributed to the circulation or movement of electric particles or electric current itself.

So be regarded as such electric currents occur in the interior of the Earth as a result of the same magnetism that makes directed to the nautical compass needle or generated.

However this magnetic field, the plot can be seen in the image of this article is far from constant and regular. The Earth’s magnetic field variations are irregular and are attributed to the variation and irregularity of the Earth’s core.

Anyway, the fact is that we live immersed in a magnetic field, the Earth. Some of the phenomena that can be observed due to this field are the Northern Lights and / or southern. This phenomenon is due to the interaction of particles from the Sun to the Earth’s magnetic field.

Why sail, had cold, sleepy, hungry, why do we do? The answer lies in the passion that awakens sea. The answer lies in his love the seaman to feel like the candles with the chilly, damp feeling next forest perfumes the riser offshore wind the answer is in the fill rewarded sacrifice. But sometimes the sea has to take its toll as there is nothing to chance.
Who is willing to pay has permission to access and learn the laws of the sea.

Fall is coming and so the storms of winter will soon appear. The last race of the season takes place at this time, namely the Mini Barcelona will take place during the week from 13 to 19 October. It will be the second race of “minis” and final race of the Classemini perform this season.

The first was difficult due to the diversity of situations that occurred, almost all wildly upwind, upwind and close reaching. Directions grateful to soft but strong winds with average or high winds. As we know the minis are not boats that stand out for their quality of barloventear.

Noting weather maps seems as if the north winds would break into the scene, we have to be alert as the main route of the race is to stop the island of Menorca to starboard. So the tramontana can make your own. With the entry of cold air will surely have vertical instability thus being the protagonists winds near 100% on this autumn race (if I remember correctly!).

It seems that we will have the honor of seeing navigate a novelty, that is, the new Pogo the third of the series and in principle if nothing happens, navigate the three generations of this legendary ship and the equally renowned Breton shipyard Structures .

With the achievement of this next race I can say that I have fulfilled the objectives of this season, we were tuning the old information literacy and participation in at least one official competition of Category C. As this is done, I can participate in the Category B race as the Mini Barcelona, ​​having accomplished so far beyond what I expected. 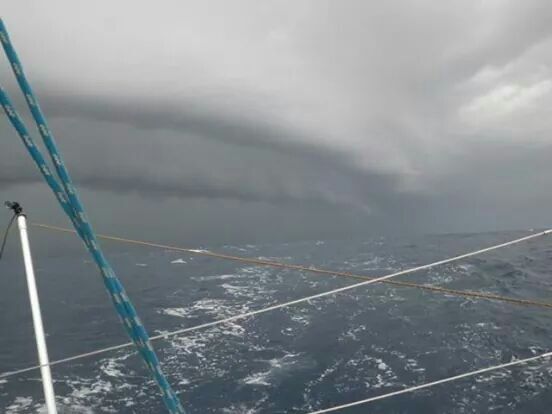 Arrival in Valencia on 24 September at 17 hours 30 minutes

3d 5h 30m 17s after the release of this second edition of the race has been given. And here you have me tired but happy to come entirely to port. And it was a tough race. But how it will not be hard if it is the first one I’ve done alone ….

This race could be followed online and even compete online against us! Look at the link http://yb.tl/air2014 (although I suppose that soon expire and will no longer be Reachable)

The organization has been overcome and the level has been good, thanks to Peter and Bret! The correct number of ships and growing.

In this edition it has been the fact that the weather conditions were not the best. This was due to the high atmospheric instability we have experienced these days. Apparently in the isobaric maps nothing it seemed to indicate what was “cooking” in front of us or rather upon us, yes overhead. The truth is that a cold mass hung over a large mass of hot, humid in the same Gulf of Valencia air. If you have this we add the high temperature of seawater. Well I am going to say I did not say the images:

This image was taken aboard the sailboat (Transat 650) by Jose Luis Durá PIK.

The truth is that we had a hard and very variable conditions where the showers were happening on a carousel of waterspouts, tornadoes, lightning and thunder. But also as you see in the picture above we suffer the impact or rather winding this convective cell or fungus or “mushroom” as quickly call to remember what we had. And is that the storm carried inside a fury comparable to that of the gods when they decided to punish the poor mortals for their misdeeds and disloyalty.
Well this mushroom showed me with his iron discipline to behave like a small human to its energy power. As a toy in the hands of a small waterspout this mega thrashed us mercilessly until exhaustion thereupon to spit into a maelstrom of wind, hail, rain and splashing water as I remember spending my days at sea. The truth is that the effect on my morale was devastating, I was lost and the boat completely lying, it seemed the end of the world … But the little Pogo incredibly well behaved maintaining its upright and upright while atemporaladas gusts buffeted us without rest for a few minutes that seemed eternal. The fungus took me to the storm jib and most curly mean, mean wind settings for both (so that no large waves). As far as I could Artie and a curly completely shut me wait time aware that the control was no longer in my hands … This feeling was that kept me out of the race with a fear or survival instinct exageramente He pointed, but not for less.
And about to reach some 17 nautical miles from Valencia another storm refuses to let us go and we plan ahead with all their weapons about large central block rain and wind all surrounded by incessant lightning and lightning strikes to the sea and as knight astride his steed a whirlwind guard the eastern flank of the storm. Damn but I’m already !! I thought. Well, we should not currarnos arrival so everything running and locked Arria wait … again, the passage of the fury.
And so the miles and fears were in the sea. Thus ended the first solo race “COURSE AU LARGE” or sailing away from the coast. 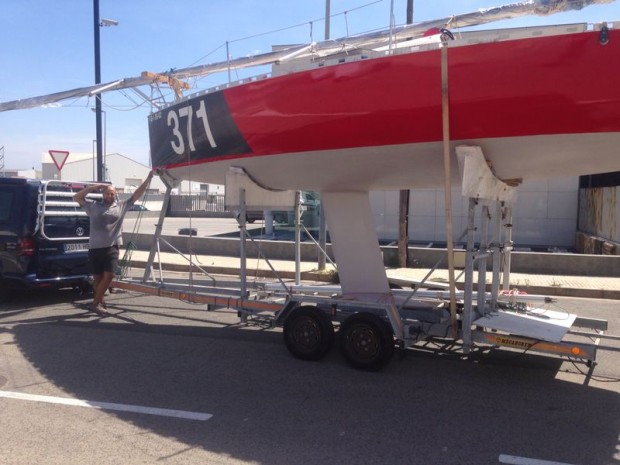 We did it! End again to float! It’s been a few months of hard work, a lesson in humility. Without the help of Toni, Eva, Guillermo, Diego, Alex, etc and great tips. I would not be where overwhelmed right now … Maybe both sanding with the ship in dry dock. The key has been turning, of course …
Now it make it run as much as he is able, on Monday it will go down to Valencia to participate in a regatta already rs classic of Spanish class minitransat Air 2014.